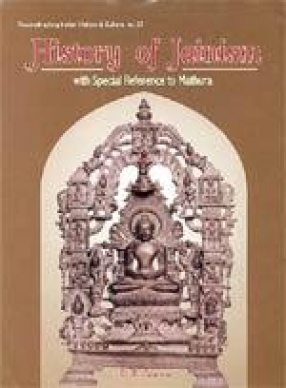 History of Jainism: With Special Reference to Mathura

V.K. Sharma (Author)
Synopsis As one of the worldâ€™s major religions, founded on the spiritual principles of ahimsa (non-violence), truth, and righteous conduct, Jainism has today 2,600 years of a splendid living tradition â€“ withu a well-defined world view, metaphysics and code of ethics. A leading scholar, V.K. Sharma here presents an altogether fresh, pan-Indian historical survey of this great religion, spelling out its beginnings, antiquity, doctrines, tirthamkaras, country-wide spread and, among other aspects, its contribution to Indiaâ€™s culture and art heritage â€“ in all its varied manifestations. In the latter part of the book, the author comes to focus upon Jainism in the specific contexts of Mathura â€“ one of Indiaâ€™s ancient cities, which not only is venerated as the legendary birthplace of Lord Krsna, but is also famed as an eminent centre of Brahmanical, Buddhist and Jaina art. Thus shows Dr. Sharma how this principal Vaisnava centre today had been a stronghold of Jainism: from c. second century BC to about eleventh century AD; how it has contributed to Jaina canon, literature and iconography; and how in Mathura is traceable the centuries-long, unbroken history of Jaina plastic art. Setting out a panoramic view of Jaina architecture, sculptural art, and socio-religious life over the ages, specially in the sacred city of Mathura, this study is based on wide-ranging authoritative sources and supplemented by a number of highly representatives illustrations.
Read more
38.70 34.83 $ 43.00 $
Free delivery Wolrdwidе in 10-18 days Ships in 1-2 days from New Delhi Membership for 1 Year $35.00
Get it now and save 10%
Add to cart Buy now Add to wishlist
Members SAVE 10% every day
BECOME A MEMBER
Books by the same author
View all
Similar items
View all
Write a review
Reviews 0in total