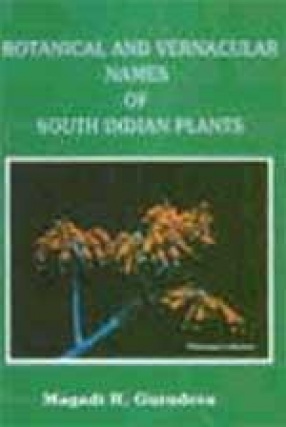 Magadi R. Gurudeva (Author)
Synopsis In this compendium botanical names of plants occurring in South India have been arranged alphabetically and numbered serially. Botanical names which contain an asterisk sign (*) indicate that these plants do not occur in South India but have South Indian vernacular names. Botanical names are followed by relevant synonyms in italics and name of the family to which they belong in capital letters. Botanical names found in earlier literature like Useful Plants of India, The Indigenous Drugs of India, Indian Materia Medica etc., are retained as synonyms, if different from the valid botanical name to facilitate the user to correlate these names found in these literatures with the present botanical names. Effort has been made to update the nomenclature of plants, however, some plants still appear under old names to avoid confusion. Each botanical name is correlated with one or more vernacular name from English, Hindi, Kannada, Konkani, Malayalam, Marati, Sanskrit, Tamil, Telugu and Tulu languages. Widely used vernacular names are highlighted in bold letters. In vernacular names several varients in spellings of the names are in usage due to the difference in pronounciation, for e.g. Datura metel L. : (in Kannada) Datthoora, Datthoori, Dathuri, Dhatthoora, Dusthoori, Duthura, Duthuri etc. In such cases selected common names are given. Appendix-I provides the full name of the authors of plants included in the compendium. Appendix-II gives alternate names of selected families. The bibliography covers the literature referred to. A separate index has been tabulated for botanical names, families, English, Hindi, Kannada, Konkani, Malayalam, Marati, Sanskrit, Tamil, Telugu and Tulu names to facilitate the search of botanical names in the compendium.
Read more
47.50 42.75 $ 50.00 $
Free delivery Wolrdwidе in 10-18 days Ships in 2-4 days from New Delhi Membership for 1 Year $35.00
Get it now and save 10%
Add to cart Buy now Add to wishlist
Members SAVE 10% every day
BECOME A MEMBER
Books by the same author
View all
Similar items
View all
Write a review
Reviews 0in total