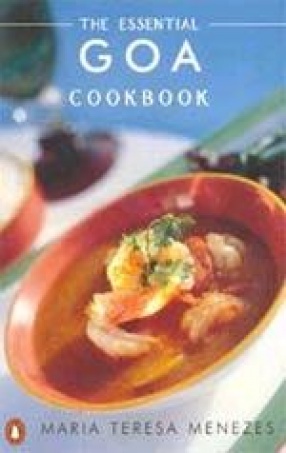 Maria Teresa Menezes (Author)
Synopsis The spicy, succulent seafood of Goa is as famous as the golden beaches and lush landscape of this premier tourist destination of India. Traditionally, the Goan staple was fish curry and rice but under Portuguese influence there developed a distinctive cuisine that combined the flavours of Indian and European cooking, with local ingredients being used to approximate the authentic Portuguese taste. So fish and meat pies were baked with slit green chillies, assado or roast was cooked with cinnamon and peppercorns, pao or bread was fermented with toddy, and the famous baked bol was made with coconut and semolina. This innovated, largely non-vegetarian cuisine, was offset by the traditional and no less sumptuous vegetarian creations from the Konkan coastland, rich with coconut and spice. This cookbook showcases an entire range of Goan food, with special attention to fish, prawn, pork and chicken. Among the recipes included are: Bebinca, Chorico - the Goa sausage, Galantine of chicken, Goa fish curry, croquettes, Lobster Xeq Xeq, Mutton Xacuti, Oyster Patties, Prawn Balchao, White pumpkin curry, Sorpotel, Stuffed crab, Tiger prawns in feni, Vindaloo.
Read more
27.00 24.3 $ 30.00 $
Free delivery Wolrdwidе in 10-18 days Ships in 1-2 days from New Delhi Membership for 1 Year $35.00
Get it now and save 10%
Add to cart Buy now Add to wishlist
Members SAVE 10% every day
BECOME A MEMBER
About the author

Maria Teresa (Tessa) was born in Mumbai in 1956. She graduated from St. Xavier's College and soon after, married an officer in the Indian Navy. Her father, as Honorary Counsel for Brazil, would often entertain at home, with one of the daughters being made responsible for the menu and overseeing the cooking. The cuisine was normally Goan. Tessa's mother-in-law, Maria Felicia Menezes, was also an excellent cook. A lot of the recipes in this book are a result of watching Maria Felicia in the kitchen and noting down the ingredients. Although she has traveled widely and now lives in Pune, Tessa's heart is very much in Goa.