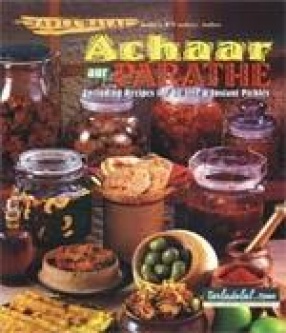 Every Indian is familiar with the popular achaar-paratha combination. Achaars served with parathas or rotis is the quickest meal a housewife can whip up for unexpected guests. In this book, I have included some traditional achaars, which I learnt from my mother including methambo, raiwala marcha, gunda keri, methia keri.Keeping in mind the busy schedule of people who are fond of eating and serving fresh instant achaars for lunch or dinner to their families and are also conscious as regards the quantity of oil used in pickles is a whole section devoted to Oil Free Achaars and Jhatpat Achaar Aur Chutney with recipes for e.g. instant lemon pickle, instant golkeri and fresh ginger turmeric pickle along with a selection of South Indian chutneys.

This book has recipes for some unusual paratha combinations like papad stuffed parathas, onion, cheese and pepper parathas; as also traditional rotis which complements all kinds of spicy pickles and mooli theplas and bajra methi khakras which are ideally accompanied by mango chunda. I have listed down step by step instructions for all the recipes in this book and have streamlined procedures to make pickling easy and fun to work with. Recipes included are -Instant Carrot Pickle; Instant Golkeri; Sweet and Sour Tomato Pickle; Dry Fruit Chunda; Pachranga Achaar; Punjabi Aam Ka Achaar; Bermi Parathas; Stuffed Bajre Ki Roti; Khakharas and Theplas.

Ms. Tarla Dalal is India's best - selling cookery author since over 2 decades. She has written a total of 100 titles, several of which have been translated in various languages like Hindi, Gujarati, Marathi, Bengali and even Dutch and Russian! The total sales of her cookery books exceed 3 million copies. Her first book 'The Pleasures of Vegetarian Cooking', which was published in 1974, was an instant success with Indian housewives. The book, which is considered a classic in cookery books, has sold a record 1, 50,000 copies. Lately there has been a new addition to the list called the TOTAL HEALTH SERIES. These are health related cookbooks with recipes and information on various subjects like The Pregnancy Cookbook, Baby and Toddler food, Delicious Diabetic Recipes, Fast foods made Healthy, Healthy Breakfast, Healthy Soups and Salads, Cooking with 1 Teaspoon of Oil, Healthy Soups and Salads, Healthy Breakfast and Calcium Rich Recipes has been her best selling book recently. In addition to writing cookbooks, Ms. Tarla Dalal also has a major web presence in the form of tarladalal.com, the largest Indian food site. Cooking & More...a bimonthly magazine is a natural extension of Tarla Dalal to reach out to millions of her fans. Cooking & more provides information and inspiration¦not just kitchen related, but pertaining to other areas of our lives as well. It talks about decorating your house, laying out a table, grooming yourself, and entertaining your guests and a whole lot of other things. Her cookery show "Cook it Up with Tarla Dalal" is aired weekly on Sony Entertainment Television. The show broadcast all over South East Asia, India, the Gulf, UK and even the US. Born in Pune, India Mrs. Dalal moved to Bombay after her marriage. In 1966, she started cookery classes form her residence. Her classes become a phenomenal success with a long waiting list of student wanting to join them. At one time, it was said 'If you want to get your daughter married, send her to Ms. Dalal's Classes'. This was because students attained guaranteed cookery expertise after attending her classes. Due to space constraints, she had to stop the cookery classes some years back but much before that, she had 'streamlined the eating habits in India' - to quote The Khaleej Times, Dubai. She has demonstrated her cuisine a healthy and tasty creative option through her cookery demonstration in large parts of India and many major cities of the world such as Tokyo, Jakarta, Honkong, Singapore, Brussels Antwerp, lisbon, Zurich, Nairobi, London, Toronto, New York etc. An interesting fact is that Ms. Tarla Dalal's books have been sold not only in various book shops and specialty shops in India and abroad but also they have done brisk business in the most unusual places like video libraries, toy shops, boutiques and supermarkets. Many of her books have been an almost permanent feature on top sellers list; Desi Khana, Low Calorie Healthy Cooking and Healthy Breakfast are among the best-sellers which have netted the maximum sale figures. According to India Today India's leading news analysis magazine, Ms. Dalal has sold the maximum number of books in any field as compared to any other Indian author and at a conservative estimate; her recipes have been tried in over 20 million Indian homes.... a chart bursting figure that would be the envy of pop stars and politicians. Ms. Tarla Dalal writes a large number of cookery columns for various publications, newspapers and magazines like Indian Express, Dainik Jagaran, Manorama, Mid-Day, Femina, Afternoon, Loksatta, Lokprabha, The Telegraph (Calcutta), Malayala Manorama, Abhiyan, Stree etc. have carried her cookery columns. Her recipes have been extensively covered by the electronic media including various TV stations/channels. She has participated in numerous cookery programmes on TV, Radio and now as mentioned earlier on her own cookery show "Cook it Up with Tarla Dalal" on Sony Entertainment Television.