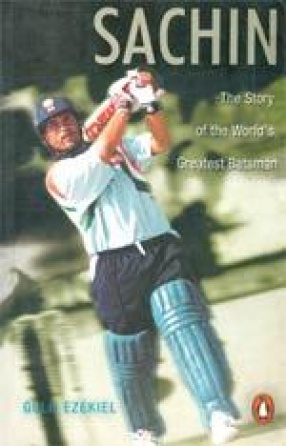 Sachin: The Story of the World's Greatest Batsman

Gulu Ezekiel (Author)
Synopsis In the thirteen years that he has been in the public eye, Sachin Tendulkar has been explosive on the cricket field and just as reticent off it.  He was barely fifteen years old when he first wrote his name into the record books with a stupendous 664-run partnership with his childhood friend Vinod Kambli.  A few months later, he struck his first century in first-class cricket.  At seventeen he became the second youngest man to make a hundred in international cricket, and after that there was no looking back.  Records tumbled as he captivated audiences first in his home city of Mumbai, then in the rest of India and all over the cricket-playing world.  Today, Sachin is widely regarded as the world's finest batsman, with impeccable technique, an incredible and friends swear by him, his fans worship him and there are few, if any, critics of his game or his temperament.  In the biography of the hero of Indian cricket, sports writer Gulu Ezekiel mines interviews, press reports and conversations over the last decade and more to create an accurate and sympathetic account of the man and his first passion: cricket.  He tracks Sachin from his childhood when he first caught the bug of cricket, though his early performances in the Ranji Trophy and other domestic tournaments, and follows him on his meteoric rise to international stardom.  With unfailing attention to detail, he reconstructs the crucial matches and events that marked Sachin's career and unravels for us the magic of the charismatic cricketer who Wisden Cricket Monthly once dubbled 'bigger than Jesus'.
Read more
24.30 21.87 $ 27.00 $
Free delivery Wolrdwidе in 10-18 days Ships in 1-2 days from New Delhi Membership for 1 Year $35.00
Get it now and save 10%
Add to cart Buy now Add to wishlist
Members SAVE 10% every day
BECOME A MEMBER
About the author

Gulu Ezekiel began his career in sports journalism with The Indian Express in Chennai in 1982 before moving to New Delhi in 1991. He has been sports editor at The Asian Age, NDTV and indya.com and has contributed to over fifty publications around the world. In August 1982 he launched GE Features, a features and syndication company. Gulu has written and contributed to a dozen sports books since 1992 and is the author of Indian Table Tennis Yearbook, Great One-day Internationals and The Story of World Cup Cricket. Sachin: The Story of the World's Greatest Batsman and Sourav: A Biography have been published by Penguin India to much critical and commercial success.