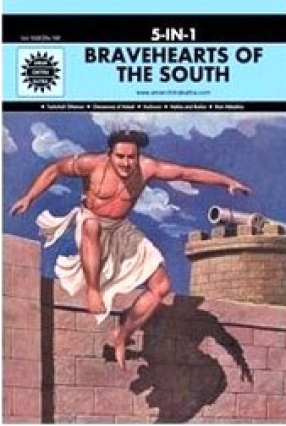 Bravehearts of the South (5 In 1): Amar Chitra Katha

Medieval India was filled with little kingdoms, bitterly fighting each other to maintain their territory and sovereignty. In South India, the many sea ports and the flourishing spice trade also brought unwanted attention from across the seas. Hakka and Bukka had to defend their lands against the armies of the powerful Delhi Sultanate, while Rani Chennamma had to fight her own neighbours. Rani Abbakka had to defend her people from the invading Portugese, while Kochunni and Othenan had to fight injustice in their own homelands. The heroes in this collection are just some of those who fought enemies both internal and external, to maintain the unity of their lands against all threats, and to serve justice as best as they could.

Anant Pai was the creator of the two most popular comic book series, Tinkle and Amar Chitra Katha. His works deal with the retelling of mythological tales, folk stories, and biographies of historical figures. He has been considered one of pioneer creators of Indian comics.

He has been associated with works like Fact Fantasy, Funtime, and Funland, all of which are education comic strips. Rekha, Ramu and Shamu, Little Raji, and Kapish are some of the comics he had created.

Born in Karkala, he was brought up by his grandfather after the death of both his parents. He then moved to Mumbai and attended the Orient School in Mahim. He had acquired dual chemical technology degrees from the University of Bombay in Chemical Technology. He was also an expert in personality development. He had conducted several personality development classes for teens and children. He had also founded Partha Institute of Personality Development, 1978. He has published several books dealing with this, such as How to Develop A Super Memory, How To Achieve Success, and How Develop Self-confidence. He was awarded by the Lifetime Achievement Award at the very first Indian Comic Convention in 2011. He married Lalita, and the couple lived in Mumbai. On 24th February, 2011, Pai died of a heart attack.