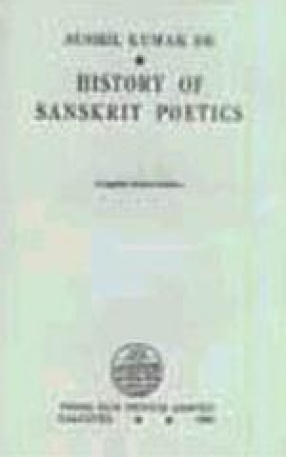 The first edition of this work was published in two separate volumes in 1923, 1925.  Almost simultaneously in 1923 appeared the second edition of the Sahitya-darpana by Mahamahopadyaya Dr. P.V. Kane, to which was prefixed an introduction of 177 pages dealing with the history of Alamkara literature, subsequently elaborated in the third edition (1951) into 423 pages.  Referring to these facts Dr. Kane writes: "Both of us were thus practically pioneers in this field.  Our books led many scholars to study the numerous works on Alamkara, to point out defects and mistakes, to produce papers dealing with several aspects of the Alankarasastra and to publish several important texts."  This will make clear the necessity of revising the present work, which was written and published independently, but which, not yet superseded, had been out of print for more than thirty years.  The scope of the present work was sufficiently explained in the preface to the first edition.  An attempt has been made to approach the subject from the historical point of view, instead of presenting a bare account of the works and authors or a mere epitome of the different topics of Alamkara.  Presuming a general knowledge and taking the representative writers (and, as far as necessary, the neglected commentators and so-called minor writers), the development of Sanskrit Poetics has been traced through its fairly long and varied course of history, which covers an extensive literature of more than a thousand years.  The first volume of the work, therefore, deals with the preliminary but important question of a working Chronology and original Sources, on the basis of which the second volume proceeds to set forth the history through divergent Systems and Theories.  It will be seen that, barring some rearrangement and division into chapters, the general form of the first edition has not been changed; but for convenience the two volumes are now published in one, divided into parts.