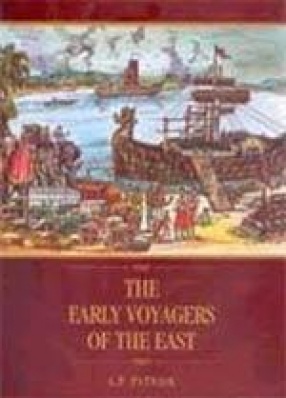 The Early Voyagers of the East (In 2 Volumes)

This book is unique in the sense that the author in this work has traced the maritime trade-links of the Kalingas, a people of Southeastern India, from the prehistoric times, by diligently following a study-design based on the place-names of the land. With the assumption that names of some places indicate the origin of immigrants who had come to this country for maritime trade in the past, the author has screened more than fifty thousand place-names of Orissa, visited hundreds of his selected sites to note down archaeological evidence, if any, and examined the socio cultural practices of people, in looking for traces of cultural impact of the alien settlers of the past. In this book, he has presented his findings in such a coordinated manner that they, on the whole, act as the corroborative evidence in support of his stated hypothesis. In this process, the author has discovered how southeastern India was in contact with the great civilizations of the ancient world that flourished in

A.P. Patnaik was born on 25th October, 1933, at the Village Patrapada, located near Bhubaneswar, in Orissa. With Masterâ€™s degrees in History and Education from Utkal University, though he started his career as a School-teacher, soon he was appointed as the Technical Officer, State Health Education Bureau, Orissa. In the year 1972, he went abroad under a W.H.O. fellowship programme and studied for two years in the School of Public Health, under the University of Michigan, Ann Arbor, U.S.A., for his degree of Master of Public Health, majoring in Health Education and Population Planning. After coming back to India, he continued as a Health education specialist and was promoted to the rank of the Chief of the â€˜State Information, Education and Communication Centreâ€™ for Health & Family Welfare programme, in Orissa. In the year 1982, he was nominated as a member of a Task-force for F.W. communication programme, by the Ministry of Health & Family-Welfare, Government of India, and was required to visit Thailand and Indonesia on a study-tour. While visiting these countries and interacting with the people there, he, for the first time, had a realization of their cultural links with ancient India, and became deeply interested in the subject. At the beginning, he cultivated a hobby of looking for the sites of ancient ports and after successfully locating a few, published papers on them. In this process, he was gradually drawn into exploring the history of maritime activity of the Kalingas and decided to have a fresh look on the subject, by undertaking a research project himself. This task, which he assigned to himself, kept him busy for long fifteen years.