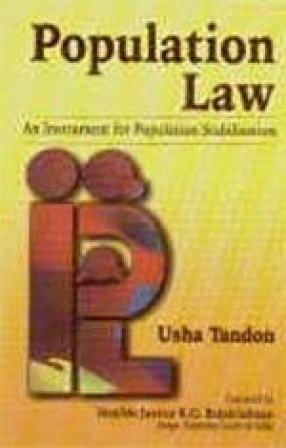 Usha Tandon (Author)
Synopsis Population Law is comparatively a new and nebulous area of study and research. Unfortunately, the subject of law and population has been almost neglected not only by the demographers and law professionals, but also by policy-makers and planners, despite the fact that law has an important role to play in stabilising the population. The main aim of this pioneering study, is to highlight the relevance and importance of law to arrest the burgeoning population of India. In India, however, law has a difficult role to play. In the West, generally speaking, law follows public opinion. In India, on the other hand, law should mould public opinion, remove traditional attitudes and foster new values, particularly in the area of fertility regulation. The significance of population control lies in helping the state to secure constitutional guarantee of socio-economic justice to the people of India. The book aims at stimulating and instructive insights to the readers. It beckons lawmen to harness their discipline and think about possible ways for legal development in population control. This study analyzes some of the basic issues like - does a couple have an absolute fundamental right to procreate? Is the issue of procreation an absolute private affair? Can law regulate it? If yes, to what extent? Can the judiciary play an active role in solving the gigantic problem of population control in India through their creative judgments by interpreting various directive principles of state policy? The study also clarifies the meaning of the word "coercion" in population control; a term which after ICPD, 1994 is highly misunderstood by Indian policy-makers. The study rejects compulsory sterilisation for population control and offers a package of incentives and disincentives through law for responsible parenthood to provide maximum pay-offs. The book will prove invaluable for researchers, jurists, lawyers, judges, planners, policy-makers, NGOs and activists.
Read more
45.60 41.04 $ 48.00 $
Free delivery Wolrdwidе in 10-18 days Ships in 1-2 days from New Delhi Membership for 1 Year $35.00
Get it now and save 10%
Add to cart Buy now Add to wishlist
Members SAVE 10% every day
BECOME A MEMBER
Books by the same author
View all
Similar items
View all
Write a review
Reviews 0in total