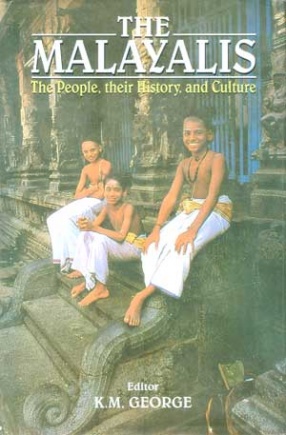 The Malayalis: The People, Their History, and Culture (In 5 Volumes)

K.M. George (Editor)
Synopsis It is a fact accepted by historians of South India that what is today Kerala was, in pre-Aryan days, part of the Chera Empire ”one of the three empires that flourished in South India in those days. Historians have also discovered various facts which go to show that Kerala had regular trade connections with Babylonia, Phoenicia, Egypt, etc., in the second and third millenniums before Christ. References are also found to Kerala in such works of the early Aryan period as the Ramayana, Mahabharatha, etc., as well as in Emperor Asoka's inscriptions. While the antiquity of Kerala is thus undisputed, it is however true that there is no reliable scientific history of ancient Kerala. But there has been a considerable lack of a scientific understanding of ancient Kerala society. Recently, however, a change has taken place in this: the growth of a bourgeois class, first in Tamiland and then in Kerala, has given rise to the development of "Dravidian history". A host of researchers have unearthed facts to show that the Dravidians of South India had, long before the Aryans of North India, developed their own civilisation, built up their own Dravidian empires, developed their own Dravidian language and literature”all independent of and distinct from the Aryan variety. This discovery of a glorious pre-Aryan civilisation of South India has finally exploded the theory of Kerala having been inhabited by uncivilised tribes who were brought into the fold of civilised society by the Aryans, since it has been conclusively shown that pre-Aryan Kerala was so civilised as to have regular trade connections with foreign countries. This reference work, perhaps the first of this kind, showcases the historical, social, political and literary development of The Malayalis. The set will be a welcome addition to the study and understanding of this marvelous land and its people!
Read more
324.90 292.41 $ 361.00 $
Free delivery Wolrdwidе in 10-18 days Ships in 1-2 days from New Delhi Membership for 1 Year $35.00
Get it now and save 10%
Add to cart Buy now Add to wishlist
Members SAVE 10% every day
BECOME A MEMBER
About the author

Dr. K.M. George (d. 2002) is an eminent author and editor in English and Malayalam. He has authored sixty books in English and Malayalam, and has been associated with the following projects as Chief Editor: Malayalam Encyclopedia (Kerala Government), Encyclopedia of Indian Literature (Sahitya Akademi), Comparative Indian Literature (Kerala Sahitya Akademi & Macmillan India Ltd), Modern India Literature: An Anthology (Sahitya Akademi). His works have received various literary awards including Bharatiya Bhasha Parishad Award and the Kerala Government’s Ezhuthachan Puraskaram. He is also the recipient of the Soviet Land Nehru Award, Padma Shri, Fellowship of the Kerala sahitya Akademi, and D. Litt. (Hon. Causa) from the University of Kerala.

Title The Malayalis: The People, Their History, and Culture (In 5 Volumes)
Author K.M. George