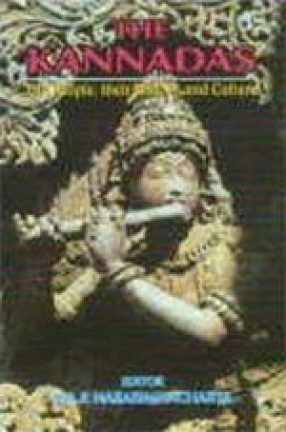 The Kannadas: The People, Their History, and Culture (In 5 Volumes)

R.A.P. Narasimhacharya (Editor)
Synopsis India has been shown up too often as a country with a baffling diversity of regions and peoples, religions and languages. But she has always been a nation of nations with an underlying unity in all her apparent diversity. This unity is essentially a matter of the spirit, a deep understanding of life. The soul of Indian culture is and has always been a steady vision of synthesis and a ceaseless striving towards unity in diversity in all the movements of life. India is, today, seeking a greater synthesis than was ever possible before through the new dynamic nationalism, based on the best ideals of ancient Indian culture. The greater the diversity of circumstances and the divergence of outlook, the greater has been the urge towards unity of a lasting nature. The growing Indian nation of today is made up of several linguistic and cultural units, units that are both self-contained and interdependent. They are drawing on the common heritage of India and are yet making their own contribution to the building up of a United India on the basis of their past heritage and their present resources. The Kannadas, and the land they inhabitâ€”Karnataka, are witnessing today a new awakening in all the fields of activity and have been buildings up their life as a vital unit of the Indian nation. The people of Karnataka have grown conscious of their past heritage and are showing an eagerness to know it in all its aspects. There has been, in recent years, a growing curiosity on the part of the people in the rest of India as well to get a glimpse of the The Kannadas, and indeed the heritage of Karnataka, and to know its contribution to Indian culture. An attempt has, therefore, been made in the following pages to outline the heritage of these great people of Karnataka, The Kannadas, with a view to discovering its uniqueness as a vital part of India, and its indebtedness as well as contribution to Indian culture as a whole. This reference work, perhaps the first of this kind, showcases the historical, social, political, and literary development of The Kannadas. The set will be a welcome addition to the study and understanding of this marvelous land and its people!
Read more
324.90 292.41 $ 361.00 $
Free delivery Wolrdwidе in 10-18 days Ships in 2-4 days from New Delhi Membership for 1 Year $35.00
Get it now and save 10%
Add to cart Buy now Add to wishlist
Members SAVE 10% every day
BECOME A MEMBER
Similar items
View all
Write a review
Reviews 0in total

Title The Kannadas: The People, Their History, and Culture (In 5 Volumes)
Author R.A.P. Narasimhacharya