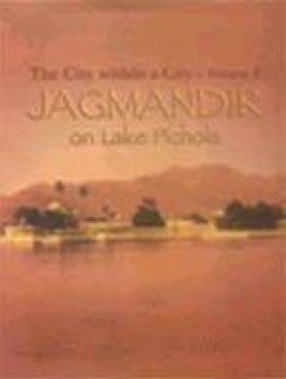 Jagmandir on Lake Pichola: The City Within a City (Volume 1)

Dipti Khera (Author) Raju Mansukhani (Author)
Synopsis The picturesque island-palace of Jagmandir on Lake Pichola in Udaipur. Udaipur, founded in 1559 on the banks of Lake Pichola and ringed by the Aravalli mountains, is distinguished by the architectural magnificence of the vast City Palace Complex and various island-palaces and pavilions developed on the lake itself. Jagmandir, a spectacular island-palace, became the ideal starting point for the research and documentation of the entire City Palace Complex under â€˜The City within a Cityâ€™ project. The picturesque island-palace of Jagmandir on Lake Pichola in Udaipur is the focus of The City within a City, Volume I. Built in the reign of Maharana Karan Singh (1620-28) and embellished by successive generations of the Maharanas of Mewar, Jagmandir is a spectacular summer palace, a swarg ki vatika (garden of heaven). The architectural grandeur of Jagmandir, its depiction in paintings of the seventeenth and eighteenth centuries and its revitalization has been a subject of ongoing research under â€˜The City within a Cityâ€™ project. This work analyses a spectrum of historical records including paintings, rare photographs, old maps and architectural drawings never presented before. Under â€˜The City within a Cityâ€™ project, the continuity of architectural heritage is being researched to provide a blueprint for the holistic growth of heritage cities. This volume, a first in the series, outlines the Indian traditions of art, architecture and aesthetics in Udaipur which are gloriously manifested in Jagmandir. It is designed to spur more research, with the involvement of global expertise and funding agencies, in this challenging subject that sensitively bridges the past with the future. In this volume, multiple layers of historical recordings and overviews relate the architectural history of Jagmandir to â€˜The City within a Cityâ€™ project; the project to the 1500-year history of Mewar; and Mewar to the ancient Indian civilization. The vision of â€˜The City within a Cityâ€™ has brought together teams of specialists drawn from various disciplines. Their interdisciplinary contributions are integrated and presented in this volume which marks the completion of one of the planned tasks of â€˜The City within a Cityâ€™ project envisaged by the present custodian of the House of Mewar, Shri Arvind Singh Mewar. â€˜The City within a Cityâ€™ is a self-sufficient model of a dynamic city in the City Palace Complex in Udaipur. Systematic and sustained efforts to conserve, preserve, restore and develop the heritage of the City Palace Complex are being addressed through the prism of â€˜The City within a Cityâ€™ project. A holistic enterprise with a multifarious character, the project necessitates the involvement of not just the entire city of Udaipur but also funding agencies, universities, scholars and specialists from all over the world who can contribute to its continuous growth, and consequently share and spread the advantages and benefits of sustainable development. â€˜The City within a Cityâ€™ project is being implemented under the aegis of the Maharana Mewar Charitable Foundation (MMCF), Udaipur. Established by Maharana Bhagwat Singh Mewar in 1969 as a public charitable trust, MMCF has been facilitating the development of Udaipur through sustainable developmental activities and enhancing the quality of life of the people of the historic city. Education and outreach programmes, healthcare, heritage preservation and conservation, museum management and preservation of places of religious worship are some of the key activities of MMCF. The foundation has instituted annual international and national awards granted for services of a permanent value rendered to society. In addition, MMCF has set up a number of subsidiary trusts for religious and charitable purposes to give assistance to the underprivileged without distinction of caste, creed or religion.
Read more
90.00 81 $ 100.00 $
Free delivery Wolrdwidе in 10-18 days Ships in 1-2 days from New Delhi Membership for 1 Year $35.00
Get it now and save 10%
Add to cart Buy now Add to wishlist
Members SAVE 10% every day
BECOME A MEMBER
About the authors

Dipti Khera, pursuing her second master's degree in museum anthropology at Columbia University, New York, is an architect with a passion for heritage conservation. Her graduate studies were at Sir J. J. School of Art and Architecture, Mumbai, and de Montfort University, UK

Raju Mansukhani, a former journalist with a master's degree in history, is a specialist in communications. He manages Rave Media and Marketing Communications, New Delhi, and has been associated with the House of Mewar since 1998.