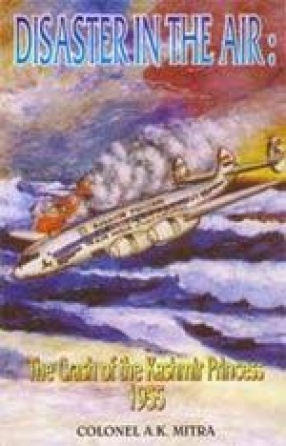 Disaster in the Air: The Crash of the Kashmir Princess,1955

A.K. Mitra (Author)
Synopsis It is not often that one comes across an international mystery thriller at the highest level of world leaders, a sort of super-who-dunnit in this case featuring, President Soekarno of Indonesia Prime Minister Nehru of India and Chou-en Lai of Communist China in the dastardly act of mass murder. The incident is the act of sabotage that caused the crash of the chartered Air-India International Super-Constellation, the Kashmir Princes, carrying a party of Communist Chinese journalists to the first Non-aligned Summit Conference at Bandung, Indonesia, in April 1955. The case was solved because of he meticulous investigation carried out by an Inquiry Commission appointed by the Government of Indonesia, and the co-operation freely offered by Air India officials, British officials in Hong Kong and by ships of the Royal Navy and the Navy of Indonesia. Colonel A.K. Mitra (late of Ninth Gorkha Rifles) and at that time serving as the Military, Naval and Air Attache in the Indian Embassy in Djakarta, was the Indian member of the Inquiry Commission. In 1955, both India and Indonesia were newcomers to the international comity of free nations states-somewhat green around the edges and to yet inured to the polity of international skullduggery. This â€œnew Asiaâ€ was still innocent of the ruthlessness of the â€œdirty tricksâ€ departments of the C.I.A. (or M.I.6 and other western Intelligence agencies); and the realization that an unarmed, civilian air liner carrying non-belligerents could be deliberately destroyed in mid-flight in order to prevent Communist Chinaâ€™s participation in a non-aligned conference, cause a sense of revulsion and horror among Asian peoples. â€œA.K.â€ has given us a very interesting account, combining accurate reportage of an official investigation with his personal knowledge of the men and events concerned â€“ all served up with a fluent style. A Good read.
Read more
12.60 11.34 $ 14.00 $
Free delivery Wolrdwidе in 10-18 days Ships in 1-2 days from New Delhi Membership for 1 Year $35.00
Get it now and save 10%
Add to cart Buy now Add to wishlist
Members SAVE 10% every day
BECOME A MEMBER
About the author

Born on April 8th, 1918 at Meerut, Uttar Pradesh. Educated at Queens College, Lucknow, College of Physical Education, Madras, Graduate from Defence Staff College, Quetta (p.s.e.). selected and attended Combined Services Course at United Kingdom. Visited France, Germany, Switzerland, Ireland and Malta on Study Tour. Before joining Army, served as Asst. Physical Director, University of Lucknow, Director of Physical Education, Medical College, Agra. Selected for His Majesties Indian Land Forces and went through Military Training at Mhow in 1940. Commissioned in the Indian Army in 1941 and posted to Ist Battalion, The Ist Punjab Regiment. On partition of India, the Regiment went to Pakistan, hence, he was selected to join 9 Gorkha Rifles. Served till retired in 1970. During Second World War â€“ 1941-45, went into action with 1/Ist Punjab Regiment as a Junior Officer at Iraq, Persia, Syria, Gaza Egypt, Libya (Western Desert), Burma (Arakan) and later after partition Commanded 2/9 Gorkha Regiment in Jammu & Kashmir. Army Service: Commanded three Gorkha Battalions and 39 Gorkha Training Centre. Staff appointment: General Staff Officer grade II at Shilong (Assam) Instructure Infantry School, Mhow. General Staff Officer Grade II Army HQ, Headquarters Western Command, Headquarters Delhi and Rajasthan area (including India/Pak Border). Chief Security Officer, Ministry of Defence. Civil Appointment: Military Secretary to the Governor of the Assam and Nagaland 1960-61 and participated in the negotiations for the establishment of Nagaland. Diplomatic Service: Military, Naval and Air Attache, Embassy of India, during 1953 to 1968 (With breaks in between) to Indonesia (1953-56), Burma and Thailand from 1964-1968. Appointed Indian Member in the International Commission of Investigation for the Crash of the Air India International Super-Constallation the â€œKashmir Princesâ€ in the Indonesia later in 1955. In this connection, with the Commission, visited Manila, Thailand, Hong Kong, Singapore, Bombay, Calcutta and the site of the crash. After retirement, served as Chief Town Administrator and Incharge of Security â€“ Hindustan Aluminium Corporation, Renukoot (U.P.) till finally retired in 1977.

Title Disaster in the Air: The Crash of the Kashmir Princess,1955
Author A.K. Mitra