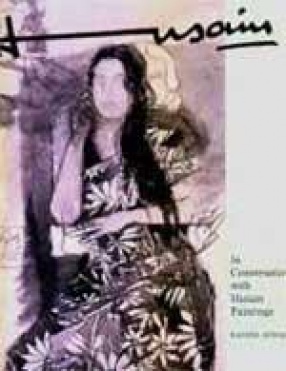 In Conversation with Husain Paintings

Rashda Siddiqui (Author)
Synopsis A legend is perhaps what describes painter and filmmaker M F Husain best; a mystical, almost magical figure compounded by a charm to which no one is immune. Who wouldnâ€™t want to know the man behind the aura, discover the human aspect of a legend? In Conversation with Husain Paintings, Rashda Siddiqui, Husainâ€™s companion and closest friendâ€™s tender tribute to the Husain phenomenon, as someone who has known and observed him intimately for several decades, offers an opportunity to do just that. Spanning most of Husainâ€™s life, right from the formative childhood years to his film, Gaja Gamini, which saw Husain at pinnacle of his creativity, this volume gives an insight into the personal life of one of the most celebrated public figures of our time. Peppered with interviews, conversations, amusing anecdotes, which bring out the warm, mischievous aspect of Husain that very few know about, this book is a sheer delight from start to finish, being as it were, almost a visual experience through its intensity and vivid narratives. In Conversationâ€¦..also brings forward an entire range of sketches, paintings, photographs, poems written both by the author and Husain â€“ none of which have ever been made public, and all of which enlivens the book to a great extent. We also get to learn about the influences that shaped Husain â€“ those of his father, grandfather and friends, his simple growing up years in his hometown Indore, and hardships faced as a struggling painter in Bombay. The writer also allows us a peep into the making of Husainâ€™s best-known series of paintings â€“ the Mother Teresa series, the Satyajit Ray series and the Umbrella series. You also get to know what went into his obsession with horses and umbrellas â€“ both of which have now become almost symbolic of Husain himself. In Conversationâ€¦could also double as a travelogue, detailing as it does, accounts of Husainâ€™s various sojourns abroad, be it China, Montreal, Japan or London, among other places. As a warm, loving tribute, the book effectively breaks down an enigma, focusing instead on the intensely human facets of one of the greatest painters of our times. In her narrative style, flowing almost like a stream of consciousness, the author presents a vivid, wonderful account and the unvarnished truth behind and humanity of the man that is Husain.
Read more
224.10 201.69 $ 249.00 $
Free delivery Wolrdwidе in 10-18 days Ships in 1-2 days from New Delhi Membership for 1 Year $35.00
Get it now and save 10%
Add to cart Buy now Add to wishlist
Members SAVE 10% every day
BECOME A MEMBER
About the author

Rashda Siddiqui was born in Lucknow and did her graduation in Anthropology Honours from Lucknow University. She has completed a two-year course insculpture from the College of Art, Lucknow. Hailing from a family of judges she was influenced to study law at the Allahabad University but didnâ€™s pursue it. Instead her avid interest in different cultures and traditions led her to travel extensively throughout India and the world. In the 80â€™s Rashda ran a successful art gallery in Delhi. Her first language is Hindi and she has studied Sanskrit and Arabic as well. She stays in New Delhi.

Similar items
View all
Write a review
Reviews 0in total