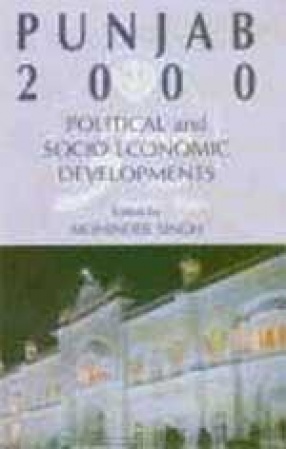 Mohinder Singh (Editor)
Synopsis Because of a variety of reasons Punjab has been and continues to attract attention from scholars and media at home and abroad. While geographical boundaries of Punjab have been changing with the march of events, its sturdy people have displayed rare sense of resilience during various ups and downs in their long and chequered history. Because of their adventurous and enterprising spirit they have not only spread to various parts of India but have made a place for themselves in various other countries as well. The Punjabi diaspora, especially in the United Kingdom and the United States, has created â€˜Mini Punjabâ€™ in foreign lands. All this has resulted in greater attention towards research and led to establishment of various institutions and chairs of Punjabi studies. With a view of facilities research in different areas in Punjab and providing ready reference to scholars and others interested in Punjab, the National Institute of Punjab studies has taken up various research projects. In its publications programme the institute started the series "Punjab: Political and socio-economic developments"â€”the first volume of which was published in 1998. The series provides precise, authentic and unbiased information on political, social, economic, cultural and religious developments in Punjab. It is a comprehensive and detailed account of day-to-day events arranged chronologically subject-wise. The volume records major happenings during the year, including role of political parties and other institutions. The present volume Punjab 2000 : Political and Socio-Economic Developmentsâ€”provides an authentic and unbiased abstract of various developments regarding Punjab including tricentenary celebration of the birth of Khalsa, Kargil war and Lok Sabha elections. It is hoped that the volume will provide much needed fillip to research in different areas of Punjab studies.
Read more
52.25 47.025 $ 55.00 $
Free delivery Wolrdwidе in 10-18 days Ships in 2-4 days from New Delhi Membership for 1 Year $35.00
Get it now and save 10%
Add to cart Buy now Add to wishlist
Members SAVE 10% every day
BECOME A MEMBER
About the author

Mohinder Singh is a renowned climber and mountaineer award winner. Civil Engineer by professional and retired as Commandant (G.D.) after having served in ITBP for 35 years. Born on 12-03-1944 at village "Raj Pur Bhayan" in the foothill of shivalik ranges. Dist. Hoshiarpur (Punjab State) India. He has done extensive trekking in Indian Himalayas for continous 25 years and also climbed in Alps (Europe). He has the distinction of being successful leadership of the First every climb of "Mount Everest", 29028 ft. from the route of North-Col Tibet (Chine) side in the year 1996 (pre honoured with the covered title "Khan Grid" by government of Mongolia in 1995 under the Culture Exchange Programme between India & Mongolia. He has rendered commendable services many years in the mountain area of Leh-Ladakh (J & K), Uttar Pradesh (Garhwal & Kumaon), Himachal Pradesh extending from Karakoram to Kumaon Himalaya. Few of the mountain achievements and adventures are mentioned below: Special rock climbing course, 1966, Basic mountaineering course at H.M.I. Darjeeling, 1967, Leader of Gangotri / Badrinath trek-king expedition via Kalandikhal 19995 ft. high peak (Garhwal Himalaya) in 1968. Climb of ferry peak (Sikkim), Advance mountaineering guide and rescue course at Australia (Europe) and climbed 03 peaks on "Alps" (Europe) 1971, Dy. Leader of Neelkantha 1974. Set a world record by his first ascent tovirgin peak. â€œSaser-Kangri-I in 1973 on 7th June. Climb of Trishul peak (7120 mtrs.) in 1970, unnamed peak (6065 mtrs.) in Kakbhusand range (Garhwal) and Pancha-Chulli-I (6037 mtr.) both in 1972. He has been pioneer to establish mountaineering & Ski-ing Institute at ITBP Auli (Joshimath) and worked as Training Officer and later on as Principal / Commandant of this Institute. He has been with foreign joint expeditions such as: Tunni peak in 1975, Gangotri peak, 1976, Nanda Devi (Main) two times in 1978 and 1979, Bhagirathi-I 1980, Nandakot 1981, East-Nanda Devi-1982. Participated Seminars and International Mountaineering Camps, Administrative officer duty in IMF 1991, leader successful expedition to Mt. Bamba Dhura (6355 mtrs) 1991, leader of successful team to Mt. Un-named peaks 6172 mtrs. & 6075 mtrs. In (H.P.) State 1992, Liaison officer and member of Indo-Ukraine (Russia) expedition to Mt. "Kangchen Junga" April-June 1993, overall leader of joint successful expedition Indo-Mangolia to Mt. "Joanli" (21760 ft.) in November 1994, Summiteer of peak, "Mana, 23860 ft. in August 1995, Summiteer of three unnamed peaks, 6725 mtrs. 6489 mtrs. & 6449 mtrs. In Leh-Ladakh in November 1995. Mohinder Singh has been awarded more than fifteen Commendations / citation, appreciations different occasion of challenging / special assignments. He has carried out meticulously mountain rescue works many times. He has been decorated with Indian Police Medal (IPM) for meritorious services in 1997 and Maharaja Ranjeet Singh Award by Punjab State Government in 1998.