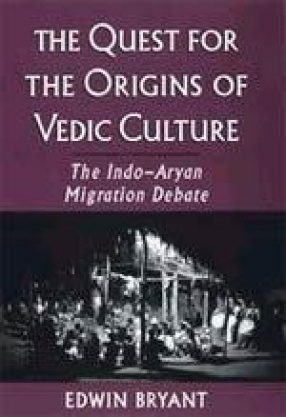 The Quest for the Origins of Vedic Culture: The Indo-Aryan Migration Debate

Edwin Bryant (Author)
Synopsis As a result of the discovery of similarities between Sanskrit and the classical languages of Europe, scholars hypothesized the existence of an early â€˜proto-Indo-Europeanâ€™ people, who spoke the language from which the others evolved. The solution to the Indo-European homeland problem has been one of the most consuming intellectual projects of the last two centuries. At first it was assumed that India was the original home of all the Indo-Europeans. Soon, however, western scholars were contending that the Vedic culture of ancient India must have been the by-product of an invasion or migration of â€˜Indo-Aryansâ€™ from outside the subcontinent. Over the years, Indian scholars have raised many arguments against this European reconstruction of their nationâ€™s history. Yet western scholars have generally been unaware or dismissive of these voices from India itself. In this book, Edwin Bryant offers a comprehensive examination of this ongoing debate. He presents all of the relevant philological, archaeological, linguistic, and historiographical data and shows how they have been interpreted both to support the theory of Aryan migrations and to contest it. Bringing to the fore those hitherto marginalized voices that argue against the external origin of the Indo-Aryans, he shows how Indian scholars have questioned the very logic, assumptions, and methods upon which the theory is based, and have used the same data to arrive at very different conclusions. By exposing the whole endeavour to criticism from scholars who do not share the same intellectual history as their European peers, Bryantâ€™s work newly complicates the Indo-European homeland quest. At the same time he recognizes the extent to which both sides of the debate have been driven by political, racial, religious, and nationalistic agendas. The only complete and up-to-date survey of the evidence and arguments for and against the Indo-Aryan migration theory, this volume is of crucial importance to the study of early Indian history and the origins of Vedic culture. This book will interest scholars and students of South Asian studies, Indo-European studies, ancient Indian history, linguistics, and comparative religions.
Read more
29.70 26.73 $ 33.00 $
Free delivery Wolrdwidе in 10-18 days Ships in 1-2 days from New Delhi Membership for 1 Year $35.00
Get it now and save 10%
Add to cart Buy now Add to wishlist
Members SAVE 10% every day
BECOME A MEMBER
Similar items
View all
Write a review
Reviews 0in total

Title The Quest for the Origins of Vedic Culture: The Indo-Aryan Migration Debate
Author Edwin Bryant