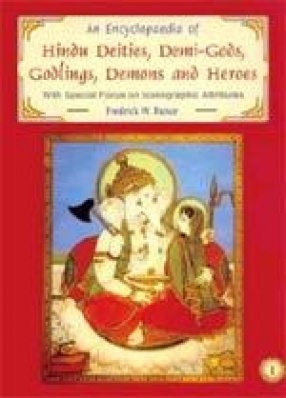 An Encyclopaedia of Hindu Deities, Demi-Gods, Godlings, Demons and Heroes (In 3 Volumes)

The Hindu pantheon is a bewildering profusion: a mix of deities, demons, and heroes, which perplexes not only the neophytes, but even the best of scholarly minds. Yet, despite the multitude of its divinities, Hinduism isn't a polytheistic religion. Worshipped over countless generations in innumerable homes and temples, these deities are, in affect, likened to "the many facets of a single crystal" - concretizing, as they do, the basic Hindu world view of an Ultimate Spirituality that is implicit in diverse attributes or both Nature and human experience. In sheer volume and imagery, in scope and variety, no other culture has produced the kinds of mythological characters and incidents that are to be met within the Hindu Puranic literature and tradition. As one delves into the complexities and interconnections of names and nuances, exploits and genealogies, one gets a staggering view of an eerie, yet magnificent world! Which this Encyclopaedia tries to unveil in its near entirety. Traversing the marvellous maze of Hindu iconography, Professor Fredrick W. Bunce: a distinguished scholar of Oriental Art, here draws together myriad iconic representations of gods and godlings, demons and miscreants, fair maidens and grotesque witches, noble princes and heartless tyrants, ascetic saints and lustful sages, cosmic strides and incestual liaisons, jealous gods and forgiving ones, births from breast and from the mind - all these and many more that are painted on the creative canvas of Hindu pantheon. The author highlights each pantheonic figure in his/her concretized, recognisable form, spelling out the very nuances of iconic language that have gone into the shaping of Hindu images. Supported by beautiful visual material, besides exceedingly useful charts, tables and diagrams, Professor Bunce's is veritably a monumental.

Fredrick W. Bunce, a Ph.D. (Comparative Arts) from the Ohio University Athens, Ohio, USA, is a cultural historian of international repute. Now Professor Emeritus of Art, Indiana State University, Terre Haute, Indiana, he has lectured at learned forums and published on a variety of art-related themes. And has held many a solo exhibition at different art galleries, art museums and universities; besides his participation in the artist's guild/faculty/other ventures of the kind. A scholar with varied intellectual/research concerns - notwithstanding his specializations in iconography, particularly Oriental and Buddhist Arts, Professor Bunce has been legitimately honoured with certain notable awards/commendations, and is listed in Who's Who in American Art and also the International Biographical Dictionary: 1980-present. Among his published books are: Encyclopaedia of Buddhist Deities (2 Vols.); Encyclopaedia of Hindu Deities (3 vols.); Dictionary of Buddhist and Hindu Iconography; and Yantra of Deities and their Numerological Foundations, all published by D.K. Printworld.