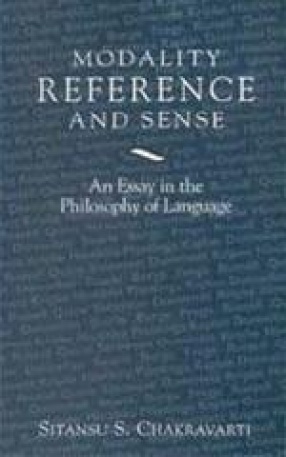 Modality Reference and Sense: An essay in the Philosophy of Language

Sitansu S. Chakravarti (Author)
Synopsis The book points to a new logic of singular designators based upon a close analysis of work in the area by contemporary philosophers of language. The philosophers range from Frege, Russell, Quine, Strawson and Dummett to Kripke, Hintikka, Plantinga, Kaplan, Donnellan, Searle and Burge. It is generally taken for granted that proper names are rigid designators, having no meaning content, which explains their intranslatability into other languages. However, they of have their modes of presentation that must constitute their sense. There is little room for contradiction here in admitting that proper names have a sense which does not amount to meaning. One of the advantages of this position is that it blocks the emergence of the Kripkean puzzle about belief by accepting different belief contents corresponding to a variation in the senses of the names involved. 'Is Kripke's distinction between rigid and non-rigid designators finally valid?' the author asks, questioning the corollaries that are supposed to follow from the distinction, viz., that proper names do not have descriptive backing , and that there are contingent a priori truths. He draws our attention to predicative occurrences of proper names, in the modal context, matching corresponding occurrences of definite descriptions. His explanation of contingency, where proper names or definite descriptions are involved, is innovatively straight, simple and broad-based, at par with situations having ordinary predicates.
Read more
13.50 12.15 $ 15.00 $
Free delivery Wolrdwidе in 10-18 days Ships in 1-2 days from New Delhi Membership for 1 Year $35.00
Get it now and save 10%
Add to cart Buy now Add to wishlist
Members SAVE 10% every day
BECOME A MEMBER
About the author

Sitansu S. Chakravarti did his Ph.D. from Syracuse University, New York, concentrating on the Philosophy of Language. He was formerly a Visiting Professor at the Departments of Philosophy, Universities of Rajasthan, Jaipur and Visva-Bharati, Santiniketan. He has taught at the Department of Religious Studies, McMaster University, Ontario. Dr Chakravarti has published in The Journal of Indian Philosophy and the Notre Dame Journal of Formal Logic. He has authored the books: Hinduism-A Way of Life and Modality, Reference and Sense-An Essay in the Philosophy of Language.

Title Modality Reference and Sense: An essay in the Philosophy of Language
Author Sitansu S. Chakravarti