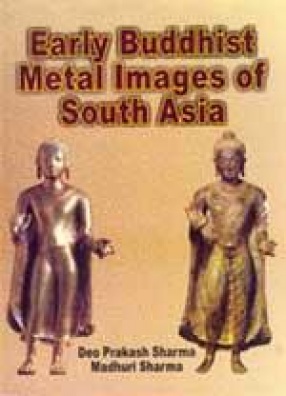 Deo Prakash Sharma (Author) Madhuri Sharma (Author)
Synopsis This book â€œEARLY BUDDHIST METAL IMAGES OF SOUTH ASIAâ€ with Special Reference to Gupta-Vakataka Period is a Joint work of Mrs. Madhuri Sharma and D.P. Sharma, both Art Historians, Archaeologists and Museologists. This includes a chapter on origin of Metal images of South Asia, different stages of Gupta period Art and Catalogue data of rare metal images of Gupta-Vakataka period. The large number of Gupta period metal images are on display in the Museums of U.S.A., U.K., Singapore, Malaysia and other countries and there are only a few (around 10) in collections of India. The author has documented all these images in this publication. The other chapters of this book are on comparison of Gupta-Vakatakas metal images with Amaravati, Gandhar, Ceylone and South East Asia; History of Gupta-Vakatakas, Art style of Gupta Vakataka period, Mehroli Iron pillar of Chandra Gupta II (Posthumous A.D. 412-415), Vakataka period excavated sites of Vidarbha which includes Mansar, Nagardhan, Mandhal and Ramtek. The authors partly agree with the view of Harley, R.C. Sharma, Pramod Chandra, Pratapditya Pal, Cuzuma S.J. Lerner, William, Dorismeth Srinivasan, Usha Tiwari, U.N. Roy, A.L. Srivastava, Vidhya Dahejia, Anamika Roy, F.M. Ashler, Anupa Pande on various stages of sculptural Art of Gupta period. They also accept two schools of Gupta Art i.e. Mathura and Sarnath. But the authors are of opinion that Mathura Art represents earlier stage and Sarnath Art is developed stage of Gupta Art. The authors have concluded that Vakataka Metal images of phophnar and Ramtek have their origin in Late Amaravati School of Eastern Deccan (Andhra). Buddhist metal images of Ceylone and export items of Kedah (Malaysia) also have their origin from Late Amaravati bronzes. The capital of Mehroli pillar is identical in Art style with the pillar of Eran. There is the possibility of CHAKRA being on the top of the capital.
Read more
82.80 74.52 $ 92.00 $
Free delivery Wolrdwidе in 10-18 days Ships in 1-2 days from New Delhi Membership for 1 Year $35.00
Get it now and save 10%
Add to cart Buy now Add to wishlist
Members SAVE 10% every day
BECOME A MEMBER
About the authors

Deo Prakash Sharma is an Art Historian, Museologist and field Archaeologist participated in the excavations at Pangoraria, Mansar, Narmada Valley, Bhimbetka Chopani - Mando, Mehagarha, Koldihwa, Mahadaha, Sringaverpura and Bharadvaj Ashram. Besides, he did extensive exploration in the districts of Fatehpur, Pratapgarh and Allahabad in U.P. and in Sehor District in Madhya Pradesh. Anopther significant contribution of the author is the discovery of Menander (Posthumous) Brahmi inscription from Reh. During 1983-84 he was awarded Commonwealth scholarship and he meritoriously qualified M.A. (Archaeology) with specialization in Palaeolithic Archaeology of the world and Pre-history of South East Asia and Australia from the Institute of Archaeology, London. He participated in the excavations at Sussex under the team of Archaeologists of Institute of Archaeology, London and at Pincentvetn (France) under Prof. Gaurhan and Mark Newcomer, both world famous Rock-art specialist. In 1985 he joined as Dy. Keeper, Pre-History and Archaeology at National Museum, New Delhi. In 1993 he was promoted as Keeper Education in National Museum. At present he is the Head of the Harappan, Pre and Proto-history and Early Archaeology collection at National Museum, New Delhi. The author has published 122 papers and ten books of which a few are listed here, Early Buddhist Metal Images of South Asia; Indus script on its way to Decipherment; Harappan Seals, Sealings and Copper Tables; Harappan Art Vol. I; Harappan Terracottas; Harappan Jewellery; Pre-historic Indian and South East Asia (Press) and Harappan Archaeology (Press) and Archaeology of Lower doab.

Madhuri Sharma did her M.A. in Ancient History. She passed Post-graduate diploma in Museology. She did some research work on Application of Statistics in Prehistoric Archaeology in Deccan College, Poon. She participate in excavations at Pangoraria, Chopani Mando and Bhardwaj-Ashram. She also participated in an International Seminar at Hong Kong University and she has published two books and sixty Research papers. Her important publication is MUSEUM AND MUSEOLOGY. At present she is engaged in a research project on early metal Images of South Asia. She has done a project on documentation of Early Metal Images in Museums of U.P.