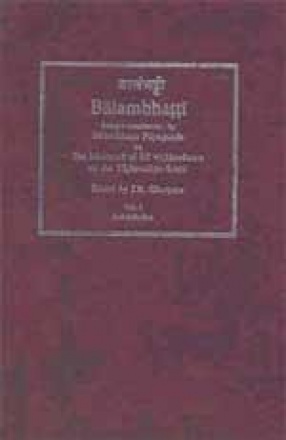 J.R. Gharpure (Editor)
Synopsis Vijnanesvara, the author of the Mitaksara (to be dated 1120-25), the famous commentary on the Yajnavalkyasmrti, is justly looked upon as one of the â€œgiants of the pastâ€, of Dharmasastra literature (Derrett 1973: 7). His work, belongs to what has been labelled â€˜category Bâ€™ of commentaries on Dharmasutras and Smrtis (Derrett 1973: 49), that is to say, it was written by a â€œcomparative scholar, servant of higher studiesâ€. Its comprehensive resolution of intellectual and practical problems (especially in the fields of penance and inheritance due to widows and female and cognate heirs generally) made it one of the few great books of the Sastraâ€ (Derrett 1973: 50). As is well-known, at least since Jolly (1896-32), the Mitaksara became a standard work at an early date in the Dekhan, and even in Varanasi and a greater part of Northern India, and exercised, in the British period, a great influence on modern judicature through Colebrookeâ€™s translation of that portion of it which deals with the law of inheritance (the â€œtwo treatises on the Hindu law of inheritanceâ€ of 1810, now again available as no. 13 of the Parimal Sanskrit series). Vijnanesvaraâ€™s work can hence not be denied an outstanding significance in terms both of the history of the Dharmasastra as well as its reception in Anglo-Indian and Indian law. The Mitaksara itself was, not unexpectedly, commented upon several times (cf. Kane 1975: 1086), but most of these subcommentaries seem to have been lost. Among those which have come down to us in manuscript form the Balambhatti alias Laksmivyakhyana has some interesting features. It was allegedly written by a lady called Laksmidevi, the wife of Vaidyanatha Payagunda (himself a student of the great grammarian Nagesabhatta/Nagojibhatta), and it is a voluminous one, even though it displays, as aptly stated by Kane (1975: 968) â€œuneven workmanshipâ€, in that â€œthe commentary on the Acara section of the Mitaksara is the most learned part of the whole book and is almost an independent workâ€ whereas the portion on Prayascitta is very meager. Unfortunately the contention about the authorship does not stand critical examination, as demonstrated by Kane (1975-970f.): It is much more likely that it was written by Vaidyanatha Payagunda himself or rather his son Balakrsna or Balambhatta Payagunda, and only ascribed to this mother. Balambhatta Payagunda was about 80 years old when Colebrooke entrusted the Dharmasastrasamgraha to him, and may indeed have lived 90 years (on. 1740-1830). In him we meet one of those extraordinarily learned Pandits of whose erudition British administrators of the stature of Colebrooke availed themselves, and it is hence little wonder that Kane (1975: 968) calls the Balamhatti â€œalmost the latest work of Dharmasastra worth special mentionâ€ in his own History of the Dharmasastra. Its author being one of the important links between the old Dharmasastra tradition and Anglo-Indian and thus also modern Indian law, the Balambhatti, no doubt, deserves the attention of scholars. The older edition of this text, or rather of one or the other of its three adhyayas, viz. that by Govindadasa in the Bibliotheca Indica (no. 162, 1904-7), Acara- and first part of the Vyavaharadhyaya only), that by S.S. Setlur (â€œThe Mitaksara with Visvarupa and commentaries of Subodhini and Balambhatti, â€œMadras, 1912) and that by Pandit Nityanand Pant Parvatiya in the Chowkhamba Samskrit series (no. 41, â€œVyavahara-Balambhattiâ€¦â€, 1914) wereâ€”not just followed, but in factâ€”supplanted by that published, and partly also prepared, by J. (=Jagannatha) R. (=Raghunatha) Gharpure: Its parts appeared in his series collection of Hindu Law Texts, almost in the sequence the adhyayas have in the Yajnavalkyasmrti, viz. first the Acaradhyaya (no. 5, Poona, 1914) and (in the same year) the Vyavaharadhaya (no. 6, Bombay), and finally the Prayascittadhyaya (no. 8. Poona, 1924). J.R. Gharpure (1872 (?)-1962) is one of those remarkable Indian intellectuals who combine the work of an advocate, or judgeâ€”in fact he was an Advocate and Principal of Law College in Pune (1923-50)â€”with literary and academic activity in the field of Dharmasastra, and thus Sanskrit learning. He wrote more than 45 books, but hardly any library in India is likely to possess all of them in spite of the high quality and clear significance of many of them for juridical studies. While others of his many publications were still available with Indian booksellers after independence, the parts of the Balambhatti were extremely difficult to find. Even antiquarian booksellers hardly ever offered any of them in their lists. In fact the difficulties in getting a complete set for the purpose of reprinting the work turned out to be almost insurmountable: One part I discovered in the private collection of my friend and colleague Patrick Olivelle in Austin who kindly agreed to put it at my disposal for the reprint, another I own myself, yet I searched the third one, viz. the Prayascittadhyaya, in v
Read more
85.50 76.95 $ 95.00 $
Free delivery Wolrdwidе in 10-18 days Ships in 1-2 days from New Delhi Membership for 1 Year $35.00
Get it now and save 10%
Add to cart Buy now Add to wishlist
Members SAVE 10% every day
BECOME A MEMBER
Similar items
View all
Write a review
Reviews 0in total