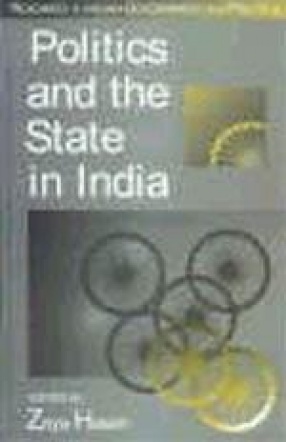 Politics and the State in India

Zoya Hasan (Editor)
Synopsis The series entitled Readings in Indian Government and Politics focuses on significant themes in contemporary Indian Government and politics. This, the third volume in the series, deals specifically with the state. It brings together seminal articles by a range of experts from the fields of political science, sociology and economics, which provide important insights into the processes of state formation, as also its consolidation and erosion. Zoya Hasanâ€™s introduction explores the social and political dynamics of the state and the major developments influencing the formation and transformation of the state in independent India. The essays that follow explore a wide range of major issues including. The historical trajectory of the modern state and its role as the central actor in economic development; The relationship between class and state power, the constrains on state intervention, and the challenges to the state from liberalization and globalization; The political culture of the state, the ideological and institutional crisis of the state, the tension between the centralizing and decentralizing tendencies of Government, the restructuring of dominance and state power, and changes in the elite and policy discourses in the realm of affirmative action and secularism; and Ethnographies of the state, particularly the ineffectiveness of Government control, the privatization of public functions, and the corruption in the everyday practices of local level bureaucracies. With its broad and insightful coverage of many topical issues, this collection will be essential reading for those in the fields of political science, sociology, democratic governance, and economics. It will serve as a text for M.A. students of Indian Government and politics while bureaucrats, politicians, planners and policy-makers will also find it of use.
Read more
22.80 20.52 $ 24.00 $
Free delivery Wolrdwidе in 10-18 days Ships in 1-2 days from New Delhi Membership for 1 Year $35.00
Get it now and save 10%
Add to cart Buy now Add to wishlist
Members SAVE 10% every day
BECOME A MEMBER
About the author

Zoya Hasan is Professor of Political Science, Centre for Political Studies, Jawaharlal Nehru University, New Delhi. She has published widely in academic journals and periodicals and is the author of Dominance and Mobilisation: Rural Politics in Western Utter Pradesh (1989) and Quest for Power: Oppositional movements and Post-Congress Politics in Uttar Pradesh (1998).

Title Politics and the State in India
Author Zoya Hasan