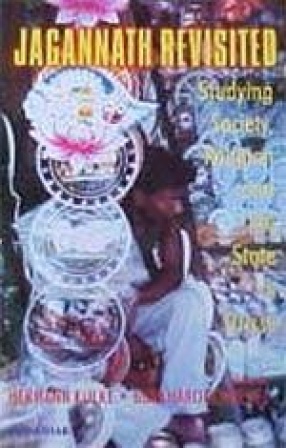 Jagannath Revisited: Studying Society, Religion and the State in Orissa

Burkhard Schnepel (Editor) Hermann Kulke (Editor)
Synopsis Twenty years after the publication of The Cult of Jagannath (Eschmann, Kulke and Tripathi eds. 1978, Manohar), a conference was held in Heidelberg, Germany, at which some of the past foci of Orissan research were reconsidered. By thus â€˜revisiting Jagannathâ€™, it was considered whether, in what respect and to what degree a shift in methods, theories paradigms or intellectual interests has taken place during the past two decades. The articles published in this book represent rewritten versions of papers held at this conference. They include contributions from social anthropology, history, Indology, religious studies, archaeology, and political science, discussing topics as diverse as religious practices among Orissan adivasis, the renewal of the body of Jagannath, the history of Mahima Dharma sect, the ritual politics of a Dhenkanal village, and the rebellious attitude of a jungle king. Compared with the Jagannath volume of 1978, a certain shift in interest can be discerned, away from the centre and the dominant groups to (apparently) peripheral or marginal areas or groups. Thus, for example, the present volume features contributions on little kings rather than the Gajapatis, on west Orissa rather than the central Mahanadi delta, on fishermen rather than Brahmans, and on village cults rather than the Puri temple. And even where Jagannath is re-investigated, it is his worship by subaltern groups rather than the scriptural, orthodox view that is the present focus of study.
Read more
39.60 35.64 $ 44.00 $
Free delivery Wolrdwidе in 10-18 days Ships in 1-2 days from New Delhi Membership for 1 Year $35.00
Get it now and save 10%
Add to cart Buy now Add to wishlist
Members SAVE 10% every day
BECOME A MEMBER
About the author

Hermann Kulke is Professor of South and Southeast Asian History in the Department of History, Kiel University. For 21 years he taught at the Southasia Institute of Heiderberg University. He was founder-member of the Orissa Research Project of the Southasia Institute (1970-5), Visiting Professor at Utkal University, Bhubaneswar (1978/9), Asiatic Society, Calcutta (1986) and Jawaharlal Nehru University, Delhi (1992). He is the author of Cidambaramahatmya (1970), Jagannatha Cult and Gajapaati Kingship (1979 both in German), co-author of A History of India (1986, with D. Rothermund), co-editor of The Cult of Jagannath and the Regional Tradition of Orissa (1978, with A. Eschmann and G.C. Tripathi) and of Hinduism Reconsidered (1989, 2nd ed. 1997), with G.D. Sontheimer) and editor of The State in India 1000-1600 (1993).