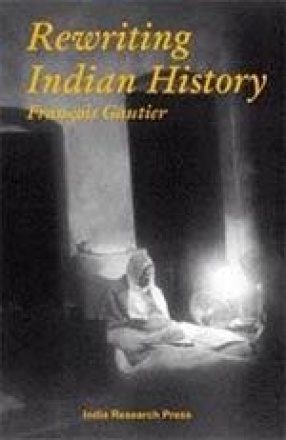 Francois Gautier (Author)
Synopsis For most historians, whether Western or Indians, India`s greatness - if there is a Greatness at all - lies in its past, in the golden period of pre-Muslim conquests. But even that greatness, they often limit to a cultural one, or else a spiritual grandeur. There also have been throughout the centuries, conscious attempts, particularly some Christian missionaries, and later by a few of India`s own westernised elite, at propagating false theories on India`s history, such as the famed Aryan invasion and its imposition on the "good" Dravidians of the hateful brahmanic class system. Or the devious inference of a benevolent Muslim rule in India, which negates the immense Holocaust which the Arabs wrecked on the peninsula from the 7th century onwards. And most unfortunate, many of these theories have resulted in a wave - pre and post-independence - of denigration of the greatness which is Hinduism and a conscious attempt at stamping it out from Indian life today. This book endeavours, not only to show that India was great in all respects, spiritually, socially, culturally and even politically, but also that this Greatness IS still there today, waiting to be manifested, waiting for India to awake to Her true destiny. However, India today is facing grave dangers, both from within and she was centuries ago, and fulfil Her destiny as the spiritual leader of the world. For as Sri Aurobindo, India`s great yogi, philosopher and revolutionary said : "It is in India, the chosen land that Truth is preserved; in the soul of India it sleeps expectant on that soul`s awakening, the soul of India leonine, luminous, locked in the closed petals of the ancient lotus of love, strength and wisdom, not in her weak, soiled, transient and miserable externals. India alone can build the future of mankind (India`s Rebirth, p. 88)
Read more
13.50 12.15 $ 15.00 $
Free delivery Wolrdwidе in 10-18 days Ships in 1-2 days from New Delhi Membership for 1 Year $35.00
Get it now and save 10%
Add to cart Buy now Add to wishlist
Members SAVE 10% every day
BECOME A MEMBER
About the author

Francois Gautier, born in Paris in 1950, is a journalist and writer. For fifteen years, he was the political correspondent in South Asia for "Le Journal De Geneve" and subsequently represented "Le Figaro"....France`s largest circulation newspaper. Francois Gautier has written several books "Un autre Regard sur l`Inde", "Arise O India", "A Western journalist on India" and "India`s Self Denial." He is married to an Indian and has lived in New Delhi, India for the past 32 years.