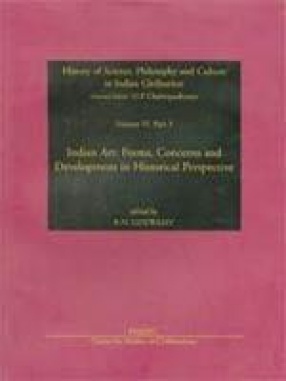 B.N. Goswamy (Editor)
Synopsis This volume offers essays by some of the most eminent art historians of India. The subjects range from Gandhara to Kerala, classical to folk arts and ancient times to the place of traditional arts in the world of today. Each essay is an authorative work by an expert in the field. Although they cover a wide range, the contributions share an interest in the artist, and the social and philosophical context of his work. The proceedings of the seminar, distinguished by lively discussions, have been transcribed and included here. The exchanges between scholars, as recorded here, and the essays presented, contain fresh insights and much new material. There are assessments here of work done, and pointers towards the direction in which the volume of art history in India might lie. The volume with its fifteen papers and index is a source book of great value to interested scholars of fine arts and general readers alike.
Read more
167.40 150.66 $ 186.00 $
Free delivery Wolrdwidе in 10-18 days Ships in 1-2 days from New Delhi Membership for 1 Year $35.00
Get it now and save 10%
Add to cart Buy now Add to wishlist
Members SAVE 10% every day
BECOME A MEMBER
About the author

B.N. Goswamy, distinguished art historian, was till recently Professor of Art History at the Punjab University, Chandigarh. A leading authority in the field of Indian painting, his work has been of seminal importance both to the studies of Pahari painting and painting in the Punjab. Among the most significant of his published works are: Pahari Painting, The Family as the Basis of Style (Marg, 1968); Pahari Paintings of the Nala Damayanti Theme (Delhi, 1975); Essence of Indian Art (San Francisco, 1986); Wonders of a Golden Age (Zurich, 1987); Pahari Masters: Court Painters of Northern India (Zurich, 1992); Indian Costumes in the collection of the Calico Museum of Textiles (Ahmedabad, 1993); and Nainsukh of Guler: A great Indian painter from a small Hill State (Zurich, 1997). His most recent work, Painted Visions: The Goenka Collection of Indian Painting, was published by the Lalit Kala Akademi earlier this year. Professor Goswamy has been visiting Professor at the Universities of Heidelberg, Zurich, Pennsylvania, California at Berkeley, California at Los Angeles, and Texas at Austin, and has lectured extensively both in Europe and the U.S., and in India. He has also been responsible for major exhibitions of Indian art in Paris, San Francisco and Zurich.